Delicious and creamy, low syn and so easy to make. This Slimming World friendly rice pudding is a winner with all of the family.

There are two types of people in this world… Some who like rice pudding and some are strange! Just a personal opinion there of course, but I literally adore the stuff. With Jam, Apple, Nutella, Cinnamon, Raspberries or simply on it’s own.

Many many moons ago I created this recipe before the meanies at Slimming World decided they were going to create something called a “tweak”. Before this disaster the recipe was classed as Syn free. Unfortunately that is no longer the case.

What is a tweak I hear you say?

A tweak is when you use a particular Syn free food in a way it is not meant to be consumed.

Rice puddings made up with diet drinks: Using diet soda (or any other Free liquid, including water) to make up pudding rice is a tweak as it makes bulky Free rice – intended to be eaten as part of a satisfying, Free Food packed meal – very easy to overeat between and after meals.

For this reason I would recommend allowing 2 Syns per portion.. but again I will leave that decision up to you. 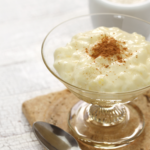 Have you created this recipe?

Please let me know how it turned out! Leave a comment below or share a photo on Instagram tagging me at @fatgirlskinny__ and the hashtag #fatgirlskinny.